Tell us who you are to get the best information on SuperCollege.

person I am a High School Student
College admissions and scholarships

stars Show Me Everything
No filters. Just show me everything!
Cancel
Home chevron_right 10 Step Action Guideschevron_rightGuide
account_boxLogin editSign Up

How to Avoid an Admission Essay Disaster

By: Gen and Kelly Tanabe

Clichés are overworked phrases like "all is well that ends well," "practice what you preach" and "don't cry over spilled milk." To you, phrases like these may seem clever. You may even use them regularly. But to admissions officers, clichés are not only trite but they also reveal a lack of sophistication and originality. If you use clichés, you will sound no better than a well-trained parrot.

You want the admissions officers to know that you are a capable writer who has the imagination and skill to write without the crutch of other people's overused phrases. Seek to use words in unique ways that are your own. This also shows the committee that you invested the time to craft your answers in ways that prove to them you are a hard worker and serious about going to college.

Along a similar vein as clichés, the over use of quotations is a sure way to make an essay sound parrot-like. This is probably a departure from what your English teacher said when you started work on your term paper, but that's because writing is all about the audience. In analytical compositions (such as your senior term paper on Napoleon), quotations were a valuable component because you were supposed to support your topic by research. However, in the limited space of the college essay, you don't want quotations to distract from your voice. The purpose of the college essay is to help the committee get to know you, not to convince someone that you know how to research a topic such as Napoleon's War Tactics.

Since quotations are not your own words, never use them in a critical point or in place of your own analysis. Maintain your originality. Using a well-known quotation is especially dangerous since 90 percent of the other applicants (who have not spent the time to prepare by reading this guide) will almost certainly use similar quotations in their essays. If you want your essay to be memorable, it must be your own presentation.

DON'T cross the line between creativity and absurdity.

The problem with most admission essays is a lack of creativity. However, some applicants go too far in trying to fashion a one-of-a-kind composition. Rather than sounding original and insightful, such an essay can appear trite and silly. A general rule is that you want your work to be as unique as possible but not so "out of the box" that the admissions officers won't take it seriously.

If you have a question about whether your work crosses the line in the creativity department, get a second or third opinion. If one of your readers feels that the essay may be a little too off-the-wall, then tone it down or even abandon it. The college application is not the place to experiment and take radical chances. While you should write creatively, beware of the easy crossover into silliness.

Varying your sentences and word choice is always good in an essay. However, writing your composition in the words of a thesaurus is one of the worst mistakes you can make. First, some of the alternate words you find in a thesaurus will probably be unfamiliar. This means that if you use these alternate words, you run a high likelihood of using them awkwardly or incorrectly.

Second, admissions officers possess a keen radar that helps them pick out those essays coauthored by a thesaurus. Call them psychic if you want, but admissions officers and members of essay committees do seem to have the ability to pick out thesaurus-aided writing. If you think about it, essays peppered with words from a thesaurus are not that hard to spot because the writing in those passages is often inconsistent with the author's general style. Adding words out your comfort zone is likely to sound forced. You want your essay to flow and seem natural.

Gen and Kelly Tanabe
Founders of SuperCollege and authors of 13 books on college planning. 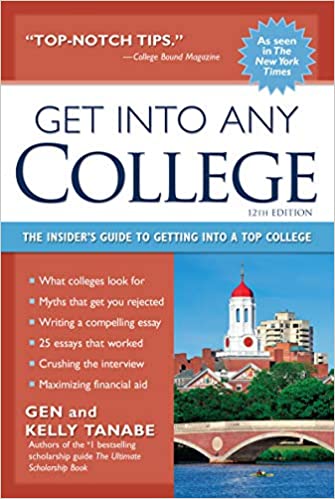 add
Get Into Any College

By: Gen & Kelly Tanabe
The only how-to book which shows all students how to get into the school of their dreams. Based on the experiences of dozens of successful students and authored by two graduates of Harvard, this book shows you how to ace the application, essay, interview, and standardized tests.